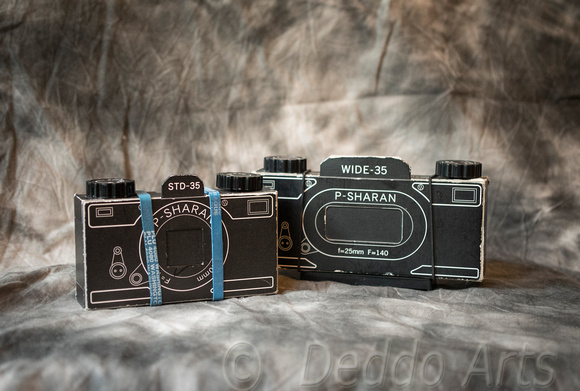 I’ve built two cardboard pinhole camera kits, the P-Sharan 35mm STD and the P-Sharan Panoramic Pinhole. I initially built the 35mm STD camera for the fun of building a kit, with little intention to shoot with it. However, as I’ve upgraded my digital gear, I began to feel that photography was becoming too fast, and my time in the field began to feel very “click and go”. I experimented with the 35mm STD pinhole camera with mixed results, and I wasn’t very inspired by the format of the images. When I saw that P-Sharan made a panoramic pinhole kit, I immediately bought that and built the camera.
One of the challenges of the P-Sharan pinhole is that there is no viewfinder, so I spend more time in the field contemplating the composition of the images and trying to accurately predict what parts of the scene will fit into the frame of my image. I enjoy the expanded view of the panoramic images, and the ability to wrap the viewer in the scene.
© Deddo Arts
Powered by ZENFOLIO User Agreement
Cancel
Continue